Questions we need to answer...?
Why should people care about modular typography?
People are bored with bitmap fonts and traditional grid structures. How can we show our audience that this conference goes way beyond that? What are more ways of creating modular type?
What makes this conference special?
Who is working with manipulating modular type these days? Who's killer at it? What makes them so awesome?
Where/when did this trend start? Where has it been seen in history (precursors?)
What are the assets of knowing these skills?
Why do designers need this?
Why is the modular type style attractive?
If this conference is about returning to the fun in graphic design, about experimentation as being an integral part to design process, then that needs to be represented in our logo and identity. Our audience needs to know that designing with what is comfortable will never allow them to progress, and that this conference is about remembering to experiment to find new ways to use typography.
With that in mind, a possible connotations list for Modulography's identity:
fun
lighthearted
breakthrough
eclectic
transformative
structured
varying/evolving
process-based
non-traditional
dynamic
poetic
Posted by Laura Berglund 2 comments: 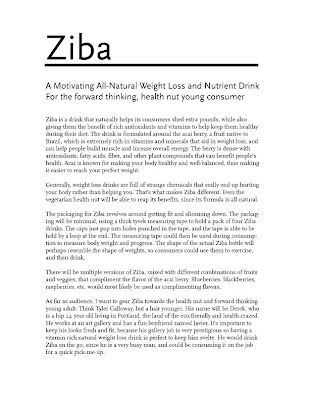 How did this reading effect or change your understanding of viewpoint on the project readings?

It makes me want to create a really rich experience for the viewer, not just based on the text, but incorporating lots of visual examples, etc, to enhance their perception. I feel like the essays we chose bring to the table the necessary basis for understanding, but we don't have any material to apply it to. I am going to seek out thought provoking examples that relate to each essay to bring it to life even more, and allow the information to do its job: to get our brains thinking.

After reading Wurman's essay, please make a post on your blog about your chosen essays:
Why did you choose them?

I chose to work with the branding essays because I feel like it has a lot of potential to inform my own design decisions in the future. Knowing about branding, what people think about it, and how it effects us are all key areas of information that will propel designers further into the field. I also found it very thought provoking that one side feels that brands are complete lies and take advantage of their consumers, while on the other side, they feel that brands are the source of reliability and trust. I just think that's an interesting comparison... I wonder if they are looking at the same kinds of brands?

Do you agree or disagree with point of their essays? Why?

I agree and disagree with different aspects of each. It is true that brands originated as a way to keep consumers coming back for more, because they knew that they were receiving quality products, but I can also see where Naomi Klein is coming from when she says that brands have progressed in recent history to something very far beyond that quality guarantee. There is so much more competition these days, that brands need to go the excessive in order to be recognized... even if that means selling a lie. Unfortunately, it works for a lot of people.

What possibilities do you foresee for designing, comparing and contrasting the two?

These essays are in direct opposition to each other, down to specific points, so it would be nice to be able to point those sections out in direct comparison. There are a few moments where they reference each other, and other areas where they kind of go into their own thing, so this could be approached in a lot of different ways. I want to keep the typography very large and direct in the web design though, since branding is all about getting seen.
Posted by Laura Berglund No comments: 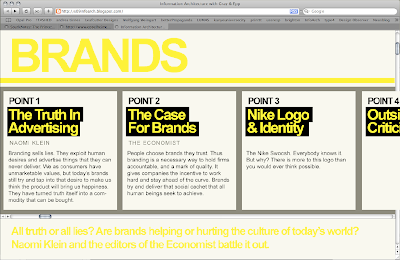 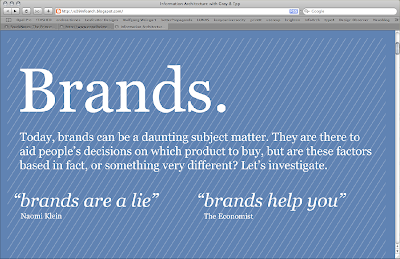 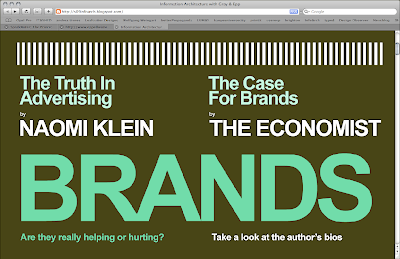 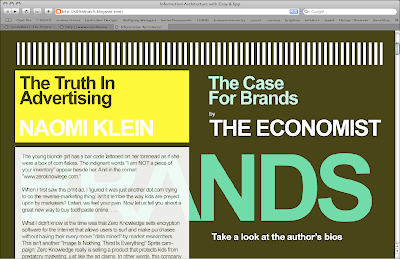 With my fellow group members Logan Smith and Morgan Allen, here's our final decisions to start our typographic conference:

Tired of that same old typeface? Is your Font Book lacking in fresh cuts? Modulography will introduce a whole new world of typographic manipulation, all based within the parameters of grid structuring and modularity. From three-dimensional experimenting, to evolving typefaces, this conference is based around process, developing new answers to the ongoing typographic question, and deepening an understanding of legibility within manipulated type. Featuring speakers like Wolfgang Weingart, Dirk Wachowiak, and Abbott Miller, this is a type conference to get designers thinking. If you’ve been stuck in a rut, here’s the opportunity to break out of the box… literally.

ideas to move forward with:

break out of the grid/manipulate the grid
transform the grid
what is good typography? asking questions
experimental forms
legibility or lack thereof (due to manipulated type)
modular vs. the organic
based on a grid/modularity/cell structure
final products could actually be 3D, like wayfinding signage, etc. to bring in Logan's side of the project
the pentagonal grid: looks 3D in 2D space
variation
Posted by Laura Berglund No comments:

brainstorm a list of theme names and decide on a few favorites to share with the class. if your name is esoteric in some way, consider a descriptive tagline that aids understanding.

write a concise and clear paragraph describing what your theme encompasses. this will appear on major conference materials and should be written in a way that generates excitement about the event.

Tired of that same old typeface? Is your Font Book lacking in fresh cuts? Modulography will introduce a whole new world of typographic manipulation, all based within the parameters of grid structuring and modularity. From three-dimensional experimenting to evolving a typeface from a simple sans to a hunchbacked and hobbled version of itself, this conference is based around process, developing new ideas to arrive at new answers to the ongoing typographic question, and deepening an understanding of legibility within manipulated type. Featuring speakers like Wolfgang Weingart discussing the transformative breakout from a strict Swiss grid, and other designers devoted to the progressive nature of typographic readability, this is a type conference to get designers thinking. If you’ve been stuck in a rut, here’s the opportunity to break out of the box… literally.

refine your designer and bio from a few weeks ago. this person will serve as your keynote speaker for the conference. you can use the bio as content for your conference materials.


Wolfgang Weingart, born in the midst of WWII Germany, is credited as the “father” of New Wave Typography. Weingart took Swiss Typographic style, and later in life “blew it apart, never forcing any style upon [his] students.” It apparently just happened that the students under him picked it up, and misinterpreted, the so-called ‘Weingart Style’, and faithfully spread it around.

He began his typographic career in the early 1960’s as an apprentice of hand composition at a typesetting firm. He then moved on to the Basel School of Design in Switzerland, to further his studies, where he attempted to develop his skills in classical Swiss typography. Armin Hoffmann, the then-head of the school, admired Weingart’s work in Basel, and asked him to teach there. Since beginning as a design teacher, he has made a huge impact on the contemporary typographic landscape.

Weingart is not known for rejecting the basic principles of Swiss typography, which emphasize right angled grid structures, use of white space as an active design element, readability, and objective communication of information. Instead he is recognized for pushing these boundaries into completely new territory, developing richly textural posters and typographic experiments, which were expressive and intuitive, rather than objective. He didn’t understand why design had moved toward the tendency to present typography in a completely objective and “value-free” manner. He pointed out that despite designers’ efforts to present information in a clear, neutral tone, most content still has subjective or otherwise emotional connotations for the viewer.

He realized that humans have a basic fundamental need for aesthetics and psychological stimulus, so his designs communicated in a way that fit those needs but are also based out of reason and logic. Weingart used typography in a way that could better express the content’s meaning, and in turn sacrificed pure articulate legibility for more visual interest and appeal. He believed that certain graphic modifications of type can in fact intensify meaning. He once said, “What’s the use of being legible, when nothing inspires you to take notice of it?”

“Weingart’s work is characterized by his painterly application of graphical and typographical elements. The emotionally-charged lines, the potent, image-like qualities of his type, the almost cinematic impact of his layouts, all speak of his great passion of creating with graphical forms. His typographic layouts are compelling yet lucid, free yet controlled. Some of his personal work is almost akin to landscape paintings, only that his paintbrush is replaced by type, rules and screens. He doesn’t seem to perceive a divide between fine art and typography.” -Keith Tam

Weingart took a strict rule set for typography and learned to embrace it as a diving board into so many new arenas for typographical experimentation. He did not turn away from the prominent style, and try to create something out of nothing, but expanded upon a solid, tried-and-true method, and in that way, his results were so much more lush and captivating.
Posted by Laura Berglund 2 comments:

USEREXP: poetic map to the shuttlecocks 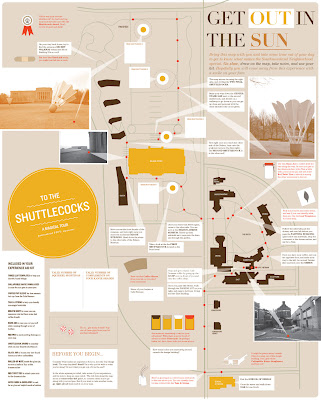 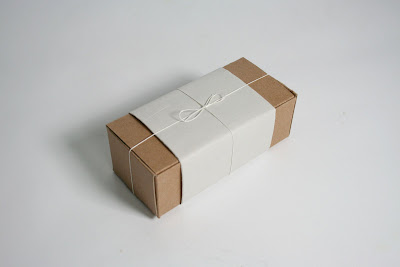 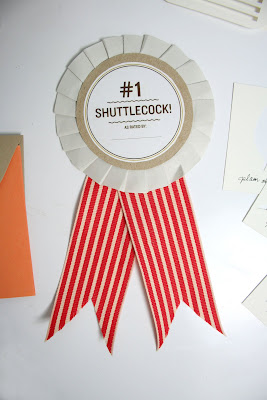 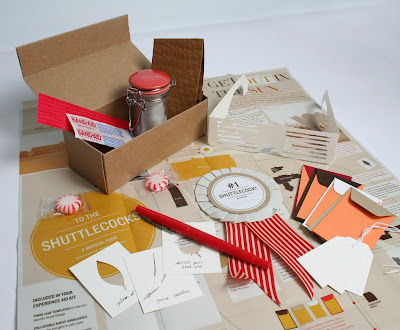 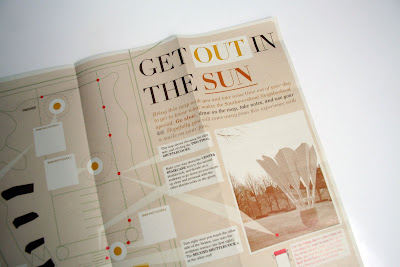 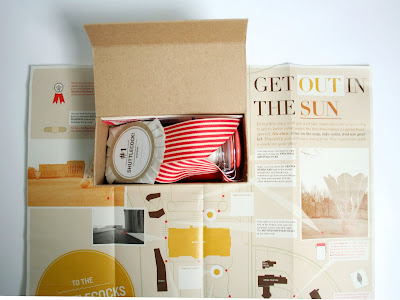 Please visit!
Plastic Taxonomy Collection
Oh yeah, and give it a minute to load... it'll be a white screen for a bit there.
Posted by Laura Berglund No comments: 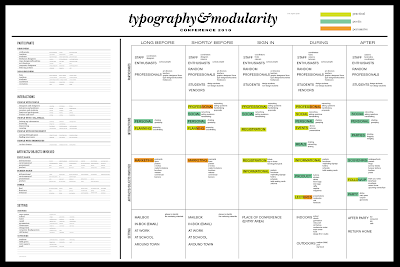 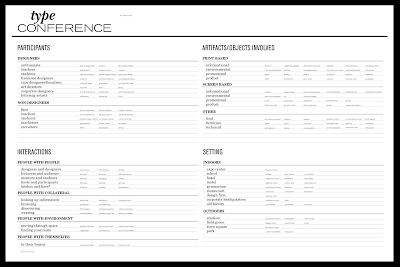 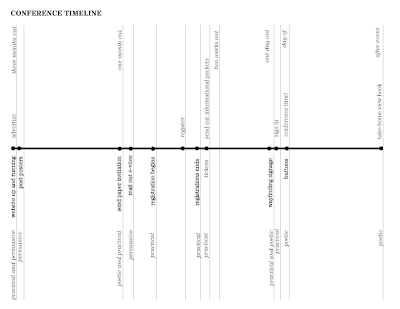